EnviroSim is pleased to announce the latest issue of “The BioWin Advantage” e-tech newsletter. This release discusses the Thermal Hydrolysis Unit.

In this issue we describe the thermal hydrolysis (TH) unit and demonstrate its application in a whole-plant simulation. The TH unit is used to simulate the breakdown of particulate components in a sludge stream generally into soluble components. The unit allows for simulation of potential impacts of sludge pre-treatment technologies on process performance such as biogas production and soluble nutrient concentrations in downstream digesters.The TH unit is a dimensionless mass balance converter that instantaneously converts the particulate state variables into predefined sets of other state variables, and the user defines the extent of conversion and the fractional distribution between ‘products’ of hydrolysis.A picture of the thermal hydrolysis unit in a BioWin flowsheet is shown below:

The sets of state variables into which particulate components may be converted are based on an extensive analysis of data for various pretreatment processes. The user adjusts the conversion fractions such that the predicted COD and nutrient concentrations in the pretreated sludge match measured or expected values.  Therefore, the TH unit may be used to model the conversions accomplished by any type of pretreatment process (not only high-pressure thermal hydrolysis). Thus other types of pretreatment such as ozonation, sonication and chemical oxidation may be represented in BioWin.

The default conversion fractions in the thermal hydrolysis unit were empirically derived to achieve the conversions typically observed when WAS is treated in a batch high-pressure thermal hydrolysis (HPTH) process at around 160 to 170°C at 7 bars for approximately 30 minutes. The performance indicators associated with this pretreatment are summarized in the following table: 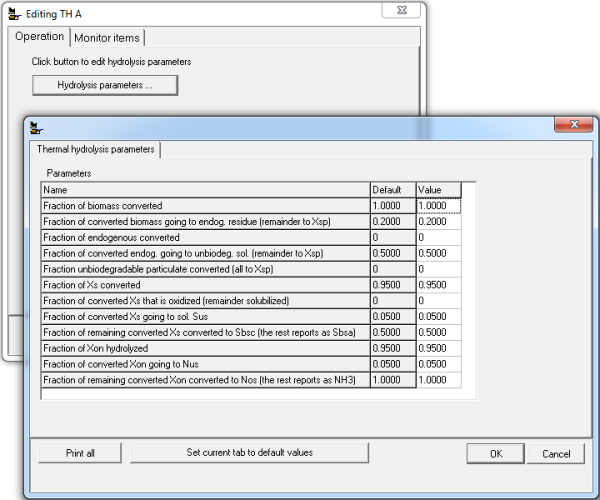 These conversion pathways are illustrated in the five tables below where the left and right-hand columns of each table represent the conditions before and after pretreatment, respectively: 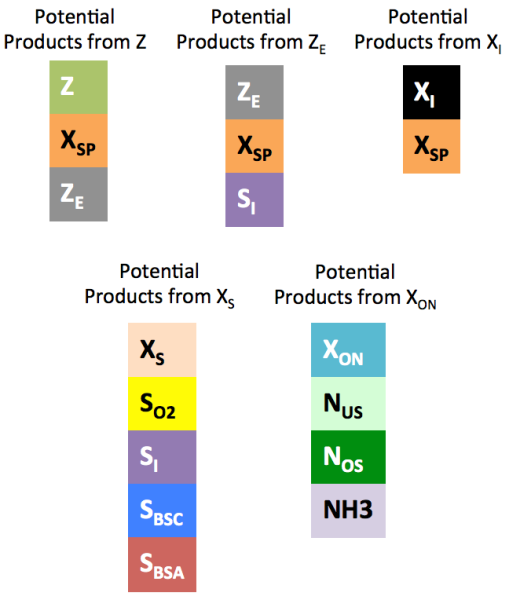 Each conversion pathway and default conversion fraction is explained in greater detail below:

A setting of 1.0 for Fraction of biomass converted is applied as the default, which means that all of the incoming biomass (i.e. all 9 biomass types in BioWin) will be converted. This value was selected because batch HPTH processes have been shown to essentially sterilize the activated sludge (Donoso-Bravo et al., 2010; Gurieff et al., 2011; Burger et al., 2012). The Fraction of converted biomass going to endogenous residue is set at a default value of 0.2, i.e. the endogenous residue fraction defined by the endogenous respiration approach for organism decay. The remaining converted biomass is reported as XSP. The conversion of biomass in the TH unit releases particulate biodegradable organic N and P, similar to the decay of biomass.

A setting of 0 for Fraction of endogenous converted is applied as the default. This value was selected because HPTH has been shown to increase the rate but not the extent of downstream digestion (Burger et al., 2012). Should the user choose to convert some ZE, one specifies the Fraction of converted endogenous going to unbiodegradable soluble (SUS). The remaining converted ZE is reported as XSP. Similar to the conversion of biomass, the conversion of ZE in the TH unit releases particulate biodegradable organic N and P.

A setting of 0.95 for Fraction of XON hydrolyzed is applied as the default. This value is equivalent to the default hydrolyzed fraction for XS since it has been shown that all types of organics (proteins, carbohydrates, etc.) are solubilized to the same extent by HPTH pretreatment (Burger et al., 2012). By using different fractions for the hydrolysis of XON versus XS, the user may force the pretreatment process to favour generation of organics with lower or higher N content. The Fraction of XON hydrolyzed applies to the XON entering and produced within the TH element. (XON may be produced within the TH element via Z, ZE and XI conversion). The default value for Fraction of converted XON going to NUS is set equivalent to the default value for Fraction of XS going to soluble SUS, i.e. 0.05. The Fraction of remaining converted XON converted to NOS (the rest reports as NH3) is set at a default of value 1.0. This value was selected because it has been shown that proteins are solubilized rather than mineralized by HPTH (Donoso-Bravo et al., 2010; Bougrier et al., 2008; Burger 2012).

Note: In the TH element, the Fraction of XS converted is automatically applied to the hydrolysis of XOP.

When you hover your cursor over the thermal hydrolysis element, process information is shown in the summary pane below the drawing board, as depicted in the example below:

The particulate and filtered COD and TKN concentrations, and the VFA and ammonia concentrations are listed, as well as the residual VSS and TSS, and pH. The displayed VSS destruction is calculated identically to that in the anaerobic digester element: (VSSIN – VSSOUT) / VSSIN * 100%.

Case Study:
Parallel Treatment Plants with and without Thermal Hydrolysis

The impacts of implementing thermal hydrolysis prior to anaerobic digestion are investigated using this BioWin file. The influent element, physical dimensions and operation of Plants A and B are identical except that Plant A incorporates thermal hydrolysis whereas Plant B does not. Various model scenarios are simulated for a range of volumetric ratios of waste activated sludge to primary sludge (WAS:PS) while maintaining the flow rate to the digester at 45 m3/d to achieve a constant digester HRT of 20 d. [Reducing digester HRT from 20 to 10 days is also considered for the TH case]. In each scenario, the default conversion fractions are applied in the thermal hydrolysis element hence TCOD is conserved across the element.

In each scenario, the steady-state simulation is run from seed values. The SRT in each plant is determined by summing the total solids mass in the reactors (Zone #1, Zone #2 and Aerobic) and the SST and dividing by the sludge wasted via the WAS splitter, i.e. a constant value of 150 m3/d. Because the liquid train is operated identically in each plant and scenario, the SRT in both plants is a constant value, i.e. 10.8 d. Typical raw wastewater fractions are applied in the influent and the FUP fraction is 0.13. 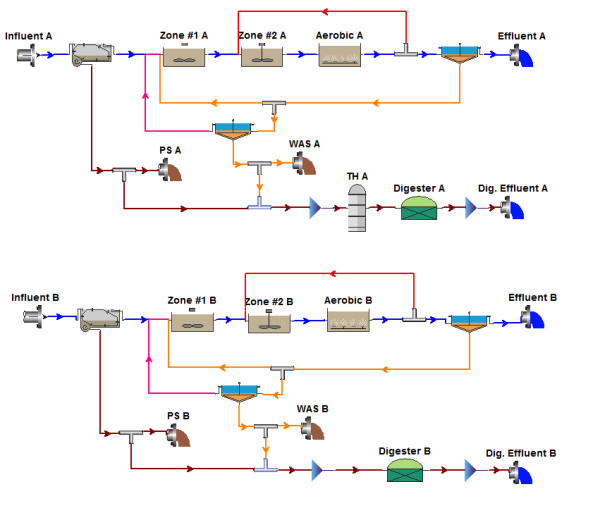 The table below shows the main operating characteristics (input and output) for the TH unit in Plant A. For each scenario, the volumetric WAS:PS ratio is indicated. 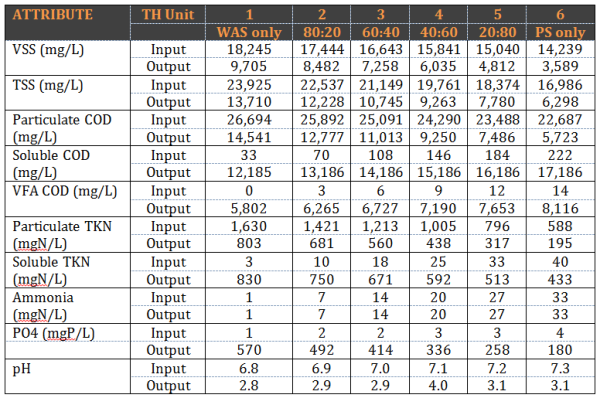 As shown in the above table, the suspended solids concentration decreases and the soluble COD and TKN concentrations increase across the TH unit in every scenario, as expected. The pH drops across the TH unit. This is mainly due to the considerable amount of VFAs that are formed. In addition, hydrolysis of particulate organic phosphorous generates phosphate which also works to lower the pH. The ammonia concentration is unchanged across the TH unit as the literature has shown that proteins are solubilized rather than mineralized by HPTH.

The pH drop across the TH unit is primarily due to the formation of VFAs. The results of the model scenarios with TH (Plant A) and without TH (Plant B) are summarized in the table below. 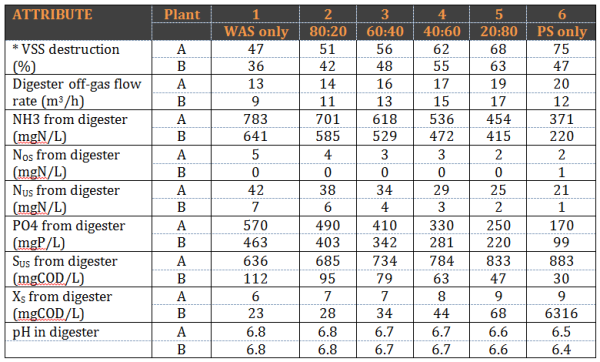 *The VSS destruction in Plant A essentially occurs entirely in the TH unit.

The above table shows that for each scenario, the VSS destruction and digester off-gas flow rate are both higher in Plant A than in Plant B. This clearly demonstrates the advantage of implementing HPTH pretreatment prior to anaerobic digestion.

There are potential disadvantages of implementing thermal hydrolysis pretreatment. As shown in the table above, pretreating the sludge by HPTH generates more NH3, NOS, NUS, PO4 and SUS in the digester effluent. This could be problematic for the plant when the digester supernatant is recycled back to the liquid train.

As the volumetric proportion of PS delivered to the digester increases, the VSS destruction and digester off-gas flow rate increases. This is expected since the PS contains more than 20 times the concentration of XS as is contained in the WAS.  This is determined by viewing the mass rate of XS (i.e. essentially all XSP) in the side stream of the splitters directing PS and WAS to the digester when the volumetric WAS:PS ratio to the digester is set at 50:50.

Increasing the volumetric proportion of PS that each plant digests improves (i.e. decreases) the NH3, NOS, NUS and PO4 in the digester effluent. This is expected as the majority of these N and P species originate from active biomass (Z) and the biomass content of PS is negligible. By comparison, biomass comprises the majority of the VSS of the WAS.

As the volumetric proportion of PS that is digested increases, the SUS in the digester effluent also decreases in Plant B. This is expected as the only process in the anaerobic digester that generates SUS is the decay of ZPAO and the ZPAO content of PS is negligible. However, the opposite trend occurs in Plant A. The introduction of the TH unit adds up to two other process that generate SUS, namely that generated upon XE and XS conversion. The VSS of the PS is mostly comprised of XS; hence SUS in the digester effluent increases as the volumetric ratio of PS increases. The default setting for the Fraction of converted XS going to soluble SUS is 0.05. If the predicted plant effluent COD exceeds the measured level at a plant where the digester supernatant is recycled back to the liquid train, the user may consider lowering the Fraction of converted XS going to soluble SUS from the default value when using the thermal hydrolysis unit to model the HPTH pretreatment of combined sludge.

Treatment of WAS Only

As shown in the screen shot below, the VSS destruction, COD solubilization and SUS generation are 47%, 46% and 2%, respectively, in the TH unit. These changes are consistent with those reported in the literature for the treatment of WAS in a batch HPTH process at around 160 to 170°C at 7 bars for approximately 30 minutes. 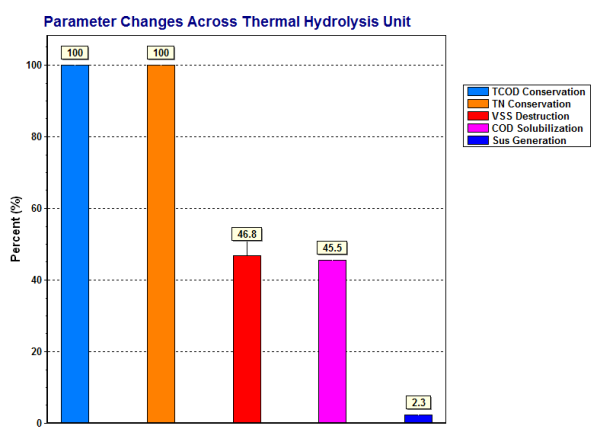 The VSS destruction, digester off-gas flow rate, COD solubilization across the TH unit and XS, SUS, NH3, NUS, NOS and PO4 concentrations in the digester effluent are shown in the following graphs. 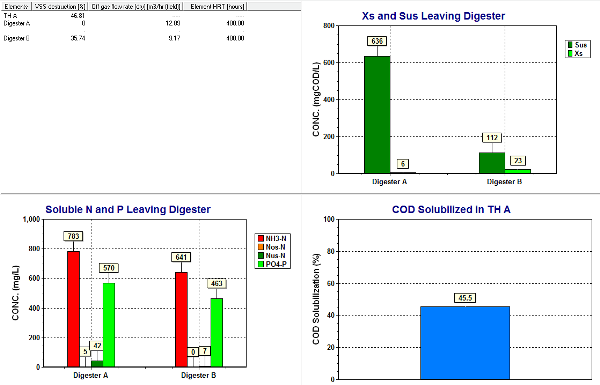 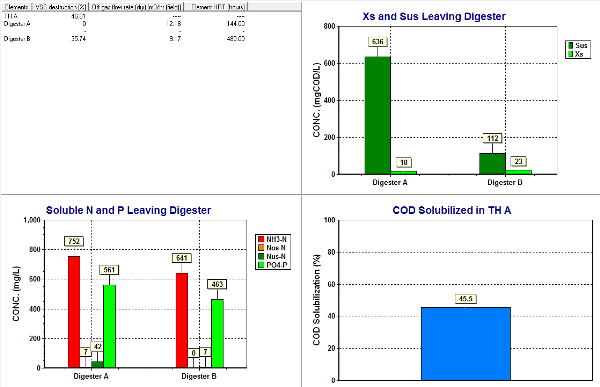 In this edition of the BioWin Advantage, we introduced the thermal hydrolysis unit and described how the default conversion fractions were empirically derived to represent the transformations occurring in a batch HPTH pretreatment process operated at around 160 to 170°C at 7 bars for approximately 30 minutes. We used a case study to demonstrate the advantages of implementing thermal hydrolysis prior to anaerobic digestion: higher VSS destruction and digester off-gas flow rates and lower required digestion time. We also showed how thermal hydrolysis pretreatment may lead to increased levels of nutrients and soluble unbiodegradable COD in the digester which may be problematic for the plant when the digester supernatant is recycled back to the liquid train.

By adjusting the conversion fractions in the thermal hydrolysis unit to match the predicted and measured COD and nutrient concentrations in the pretreated sludge, the user can customize the TH unit to model the conversions accomplished by different types of pretreatment process, not only HPTH.

We trust that you found this technical topic both interesting and informative.

Please feel free to contact us at support@envirosim.com (Subject: The BioWin Advantage) with your comments on this article or suggestions for future articles.

Thank you, and good modeling.